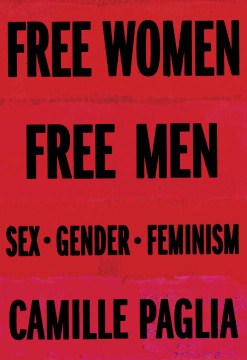 Both feminist leader and feminist dissident, Paglia has shown in books like Sexual Personae and Vamps & Tramps that she can write edgily about gender issues and sell hundreds of thousands of books in the process. This volume collects the best of her essays and carries a fresh introduction.. Copyright 2016 Library Journal.

Paglia (humanities & media studies, Univ. of the Arts, PA; Sexual Personae) is known for her critical views of culture, and the essays contained in her latest book are no exception. Known as a "dissident feminist," Paglia's views on topics considered sacred to feminism have led to tensions between herself and the current feminist establishment. Here, she uses new insight to dissect issues relating to feminism, such as gender equality and the loaded topic of abortion. What is perhaps most impressive about Paglia's writing, however, is the absence of any vendetta against men. In fact, she notes, "It was always the proper mission of feminism to attack and reconstruct the ossified social practices that had led to wide-ranging discrimination against women. But surely it was and is possible for a progressive reform movement to achieve that without stereotyping, belittling or demonizing men." The author eloquently illustrates the dangers of narrowly defining a feminist according to what issues they support. Instead, she argues for feminism to become an umbrella of people with differing political views, sexual orientations, and religions who seek to strengthen women, without the need to demean men. Intriguing and thought provoking for readers interested in different perspectives of feminism. [See Prepub Alert, 9/12/16.]—Stacy Shaw, Orange, CA

The mother of all questions: further reports from the feminist revolutionsSolnit, Rebecca

The witches are comingWest, Lindy

We should all be feministsAdichie, Chimamanda Ngozi, 1977-