The stars are fire : a novel / Anita Shreve. 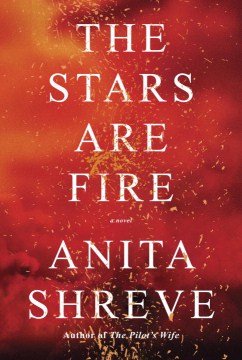 After the wettest spring in memory, the summer of 1947 is dry and scorching in coastal Maine. Grace welcomes the long days that allow her to get out with her two young children, but at home, they only heighten the turbulence in her struggling marriage. Life changes overnight when wildfires sweep down the coast, destroying everything in their path. Through a terror-filled night, Grace manages to save herself and her children, but by morning, their home is gone and her husband is missing. With little education or job experience, Grace takes a risk by moving her family to a new town and taking work where she can find it. She thrives in her new surroundings, but rebuilding one's life does not mean that the past won't find you. Though the characters lack dimension, best-selling Shreve's (Stella Bain, 2013) portrayal of a community in a natural disaster is on point, and Grace's self-discovery in her time of need is genuine. Ultimately, this is a suspenseful and heartwarming story of not just overcoming but also growing in the face of great difficulty.HIGH-DEMAND BACKSTORY: A robust print run, avid publicity, and an author tour will drum up interest in Shreve's latest page-turner. Copyright 2017 Booklist Reviews.

Classic Shreve, this work draws on real-life events: fires in late 1940s Maine that proved the largest in the state's history. Grace Holland is pregnant and tending to two toddlers when her husband joins the volunteer firefighters, and she and friend Rosie—also with two young children—watch their homes burn to cinders as they rush to the beach for safety. Safety is about all they have left—and then things get worse. With a 200,000-copy first printing.. Copyright 2016 Library Journal.

Shreve's (Stella Bain) latest brings readers to 1947 coastal Maine. In a close-knit town, Grace Holland, a young mother of two, enjoys camaraderie with her neighbor Rosie. She feels herself relax into discussions with Rosie that she can't have with her taciturn husband or her loving but rather rigid mother. In a time when the only advance warning for fire is the smell of smoke, residents prepare ahead of time. Grace wakes to the sound of her daughter coughing, bundles her children into the baby carriage, and carries them to the beach, where she thinks quickly enough to prepare protective wet air pockets from blankets, ordering Rosie to do the same. As the town burns around her, Grace rises to handle each astonishing ordeal as she meets it. Based on the harrowing true story of the largest fire to ravage the coast of Maine, this is sure to be a best seller. Shreve's prose mirrors the action of the fire, with popping embers of action, licks of blazing rage, and the slow burn of lyrical character development. Absolutely stunning. [See Prepub Alert, 11/16/16; "Editors' Spring Picks," LJ 2/15/17.]—Julie Kane, Washingrton & Lee Lib., Lexington, VA

Stuck in a loveless and uncommunicative marriage with her husband, Gene, young housewife and mother Grace Holland has resigned herself to a future of childcare and housework. It's just after World War II, and there aren't many other opportunities for married women in coastal Maine. But when, after a summer-long drought, a massive fire breaks out and threatens her home and community, Grace may have an unexpected chance not only to rebuild but also to rewrite her personal narrative. Shreve () writes with fondness of the coastal New England landscape, and she provides plenty of vintage details to evoke postwar life. Characterizations, however, are less convincing; Gene's cruelty to Grace seems disproportionate to its purported rationale, and the novel's final pages feel implausible and anachronistic, even given Grace's newfound self-reliance. Nevertheless, many readers will be buoyed by Grace's strength and resourcefulness and will be eager to debate the ethical decisions she makes as she seizes her independence.

My name is Lucy BartonStrout, Elizabeth