The weight of ink / Rachel Kadish. 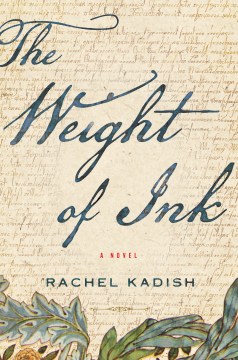 Kadish positions two women born centuries apart yet united by a thirst for knowledge at the core of a richly textured, addictive novel stretching back and forth through time, from contemporary London to the late seventeenth century. When Helen Watt, a seriously debilitated expert on Jewish history, joins forces with a graduate student to uncover the identity of the anonymous scholar who penned a sheaf of newly discovered seventeenth-century Jewish documents, the two race against both the clock and another team of academics in an attempt to unmask the long-overlooked "Aleph." In 1660s London, Rachel Velasquez, a Jewish immigrant from Amsterdam, becomes a scribe for a blind rabbi. As a woman, she struggles against societal expectations and prejudices to achieve her ambitions. Meanwhile, Helen battles against the odds to uncover one last buried piece of history and give Rachel her due before it is too late. Kadish has fashioned a suspenseful literary tale that serves as a compelling tribute to women across the centuries committed to living, breathing, and celebrating the life of the mind. Copyright 2017 Booklist Reviews.

Helen Watt, an elderly British academic in Jewish studies, sees her final opportunity for fame in a collection of 17th-century documents discovered in a cupboard behind a stairway in the home of a former student. The documents, primarily written in Portuguese and Hebrew, are the work of an unknown scribe, identified by the Hebrew letter aleph. As she researches, Helen and her graduate assistant Aaron Levy find that "aleph" is actually a woman named Ester Velasquez who scribed for a rabbi, blinded during the Inquisition. Ester, like Helen, chose a life of intellect over that of marriage and family. The stories of both women are linked as the novel moves back and forth between their lives 350 years apart. Ester and her blind rabbi are beset by the plague and anti-Semitism while Helen and Aaron struggle through the toxicity of academia and their own botched personal relationships. This astonishing third novel from Kadish (after From a Sealed Room and Tolstoy Lied) introduces readers to the 17th-century Anglo-Jewish world with not only excellent scholarship but also fine storytelling. The riveting narrative and well-honed characters will earn a place in readers' hearts.—Andrea Kempf, formerly with Johnson Cty. Community Coll. Lib., Overland Park, KS

Like A.S. Byatt's and Tom Stoppard's , this emotionally rewarding novel follows the familiar pattern of present-day academics trying to make sense of a mystery from the past. Helen Watt, a British historian facing retirement, and her much younger American assistant, Aaron Levy, are asked to examine a cache of documents found in a London townhouse, purported to be the work of a blind rabbi in 1661 and written out by a copyist known only as Aleph. Aaron is brash and right from the outset rubs prickly, Parkinson's-suffering Helen the wrong way. But they are forced to work together after Helen realizes that Aleph was most probably a Jewish woman—unheard-of for the 17th century. In alternating chapters, we see life of the copyist, Ester Velasquez, as an immigrant from Amsterdam, her friendship with a wealthy Jewish merchant's daughter, her attempts to survive the plague and the Great Fire of London, and her covert correspondence with the preeminent minds of the period, including rogue philosopher Benedictus de Spinoza. Meanwhile, in the present, Helen and Aaron overcome academic infighting, rival historians, and greedy house owners to uncover Ester's fate. What they find out about her life informs what they ultimately learn about themselves. Ester's story illuminates the plight of London Jews in the 17th century, and Helen and Aaron's sparking relationship is vivid and memorable, as the two historians discover how desire can transcend time.

The marriage of opposites: a novel based on the life of Rachel PizzarroHoffman, Alice

The map of loveSoueif, Ahdaf

The midwife of VeniceRich, Roberta