What we lose : a novel / Zinzi Clemmons. 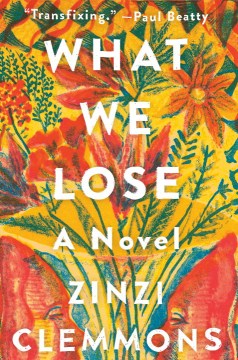 *Starred Review* Clemmons' spectacular debut is written in bursts, from single-sentence pages to sparse paragraphs, and combines photographs, diagrams, charts, articles, and blog posts to amplify an intimate story of personal loss into a larger narrative of identity, family, race, and socioeconomic access. Thandi is the daughter of a New York–born mathematics-professor father and Johannesburg-born-nurse mother. She grows up privileged as a "light" African American in Philadelphia. Her lifelong best friend is Aminah, their bond cemented by their parents' friendship, which resulted from their fathers being two of the only five African American faculty at their university. Thandi's mother dies of cancer while Thandi is in college, leaving her with a gaping emotional void that only intensifies when she, too, becomes a mother. Clemmons creates haunting authenticity by imbuing Thandi with autobiographical elements—parentage, life in Philadelphia, attending Columbia, her mother's death—but through enhanced fiction, she pushes Thandi into global citizenry, shows her skin color to be a barometer of fraught relationships and race politics, explores mother-child bonds with brutal honesty, and even reveals cancer to be "a disease of privilege" elevated with ribbons and campaigns. Clemmons performs an exceptional sleight of hand that is both affecting and illuminating. Copyright 2017 Booklist Reviews.

Raised by a South African mother and an American father, Thandi walks the color line. Then she learns that her mother has cancer. Debuter Clemmons, who has a second novel signed, writes on the Black Lives Matter movement for Literary Hub.

Exacting reflections on race, mourning, and family are at the center of this novel about a college student whose mother dies of cancer. Born to an American father and a South African mother, Thandi is a character defined by conflicting conceptions of identity, belonging, and class, divisions that only deepen in the wake of her mother's death. Early chapters establish these dichotomies in content and form, contrasting Thandi's charged visits to Johannesburg with her Philadelphia coming of age by way of photographs, articles, graphs, and song lyrics. The first third of the novel culminates with Thandi discovering that she is pregnant, before then detailing her mother's illness and how the resulting heartbreak ushered Thandi into an ill-fated long distance relationship with Peter, the child's father. Peter moves to New York to marry Thandi and raise their child, Mahpee, but all parties soon glean the untenability of Thandi's building a new family without processing the grief of her original one. Though too restrained, there are some inspired moments, and Clemmons admirably balances the story's myriad complicated themes.

And the mountains echoedHosseini, Khaled