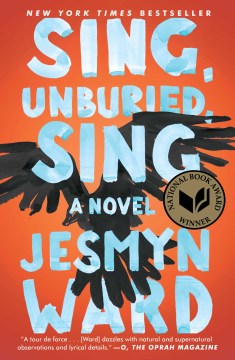 Jojo, 13, and his 3-year-old sister, Kayla, live with their grandparents, Mam and Pop, while their mother, Leonie, struggles with drug addiction and her failures as a daughter, mother, and inheritor of a gift (or curse) that connects her to spirits. Leonie insists that Jojo and Kayla accompany her on a two-day journey to the infamous Parchman prison to retrieve their white father. Their harrowing experiences are bound up in unresolved and reverberating racial and family tensions and entanglements: long-buried memories of Pop's time in Parchman, the imminent death of Mam from cancer, and the slow dawning of the children's own spiritual gifts. Ward alternates perspectives to tell the story of a family in rural Mississippi struggling mightily to hold themselves together as they are assailed by ghosts reflecting all the ways humans create cruelty and suffering. In her first novel since the National Book Award–winning Salvage the Bones (2011), Ward renders richly drawn characters, a strong sense of place, and a distinctive style that is at once down-to-earth and magical. Copyright 2017 Booklist Reviews.

Finally, Ward's next novel after the stupendous, National Book Award-winning Salvage the Bones. It stars Jojo and his toddler sister, Kayla; their sometimes-there, sometimes-not mother, Leonie, a drug addict who has visions of her dead brother; and their grandparents Mam, who's dying of cancer, and Pop, who struggles to hold the family together. When Leonie learns that the white father of her children will be released from prison, she loads them and a friend into her car and drives to the state penitentiary. With a ten-city tour.

In her follow-up fiction to the National Book Award-winning Salvage the Bones, Ward ambitiously fractures the extended family she portrays along race lines and moves her narrative from the tense realism of Southern rural poverty and prejudice to an African American-rooted magic realism. The story shifts among multiple narrators, opening with profoundly sympathetic Jojo and toddler sister Kayla living with grandparents Pop and Mam, who's dying of cancer. Their drug-raddled mother, Leonie, rarely there and usually mean when she is, invests all her energy in longtime white lover Michael, the father of her children. Their arguments are epically brutal, yet when Michael is released from prison, Leonie loads the children and friend Misty into the car and rushes north from their Mississippi Gulf home to retrieve him. Interwoven into this story is the moving relationship of near-adolescent Jojo with Pop, who tells Jojo about his own time in prison and his desperate efforts to protect a younger boy named Richie. The narrative, which is occasionally slowed by domestic detail, jerks tightly together on the ride home with the appearance of Richie's ghost and sails through to an otherworldly, vividly rendered ending. Lyrical yet tough, Ward's distilled language effectively captures the hard lives, fraught relationships, and spiritual depth of her characters. [See Prepub Alert, 3/8/17.]—Barbara Hoffert, Library Journal

Ward () tells the story of three generations of a struggling Mississippi family in this astonishing novel. "We don't walk no straight lines. It's all happening at once. All of it. We all here at once." This is the explanation 13-year-old Jojo is provided by his grandmother, the family matriarch, on her deathbed. "I'll be on the other side of the door," she reassures him, "With everybody else that's gone before." Jojo and his little sister, Kayla, live with their grandparents, while Leonie, their mother, drifts in and out of their lives, causing chaos. Snorting coke one night, Leonie explains, "A clean burning shot through my bones, and then I forgot. The shoes I didn't buy, the melted cake..." Leonie wants to be a better mother, and when Jojo's and Kayla's father is released from prison, Leonie takes the kids with her, hoping for a loving reunion, but what she gets instead is a harrowing drive across a muggy landscape haunted by hatred. Throughout the novel, though, are beautifully crafted moments of tenderness. When the dead, including Leonie's murdered brother, make their appearances and their demands, no one in the family's surprised. But their stories are deeply affecting, in no small part because of Ward's brilliant writing and compassionate eye. (Sept.)

She would be kingMoore, Wayetu

A kind of freedomSexton, Margaret Wilkerson