That's what she said : what men need to know (and women need to tell them) about working together / Joanne Lipman. 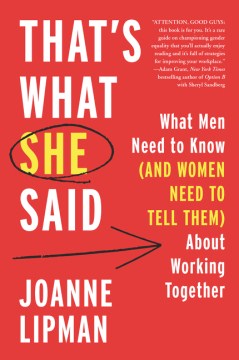 Despite years of diversity training, mentoring, and other efforts, corporate America still suffers from a significant gender gap. Lipman, who herself worked in the then-male-dominated field as a reporter at the Wall Street Journal and who is currently editor in chief at USA Today, feels that the real solution is to get men involved in the discussion of these issues. Using wide-ranging examples, such as Google, the Harvard Business School, the Chicago Symphony Orchestra, and the nation of Iceland—which is currently rated number one for gender equality—she advocates that solutions will arise when more men become genuine advocates for women. She sees this already occurring with members of the millennial generation, but it still has a long way to go in the entrenched and powerful managers of her own generation. That's What She Said shows why empowering women as true equals is an essential goal for women and men—and Lipman suggest pathways that can make that happen. Copyright 2018 Booklist Reviews.

With gender pay gaps and sexual harassment increasingly in the news, books on improving the lot of women in the workplace are more relevant than ever. Lipman, chief content officer of Gannett and editor in chief of , has written this latest paean to achieving full equality. Full of solid points and extensively researched and footnoted, this book makes a point of not blaming men exclusively for the current climate. After all, as the author points out, the problems will take both men and women to solve, so alienating men is not the answer either. Implicit (as well as explicit) bias is raised, as well as issues exacerbated by women themselves, including a hesitancy to blow their own horns and seek out promotions and raises. Blind auditions are cited as one fix, but their use is limited to just a few fields. Unfortunately, much of the book feels like the author is "preaching to the choir." While well written, with timely examples and illustrations, there appears to be little that can be done to combat the problems raised without major cultural and leadership shifts. That said, getting the word out yet again, cannot hurt. A good book on a sadly current topic. [See Prepub Alert, 8/21/17.]

Lipman (), editor-in-chief of , makes a bold statement with this important book examining biases favoring men in business. In this road map to empowerment, Lipman explains that it's not just men who devalue their female colleagues' work, but also the women themselves, as perhaps most tellingly illustrated by a survey of social-psychology studies observing this phenomenon beginning in childhood. To be sure, readers will learn here of companies actively addressing gender imbalances. Lipman commends Blake Irving of GoDaddy, a company once notorious for sexist advertising, for becoming an outspoken proponent of equal pay. Elsewhere she observes that after the U.S.'s leading symphony orchestras began blind auditions, wherein auditioning musicians perform behind a screen, female representation skyrocketed, from 5% in 1970 to nearly 50% today— a tactic she finds applicable to the business world. According to one dramatic figure Lipman cites, encouraging women who gave up work for motherhood to rejoin the labor pool could add as much as $2.1 trillion to the U.S. economy. This book goes a step further than Sheryl Sandberg's bestselling and challenges both men and women to examine their own prejudices and actively reshape work cultures to be more welcoming to women.

Lean in: women, work, and the will to leadSandberg, Sheryl

The confidence code: the science and art of self-assurance--what women should knowKay, Katty

Earning it: hard-won lessons from trailblazing women at the top of the business worldLublin, Joann S.

Knowing your value: women, money, and getting what you're worthBrzezinski, Mika

The Athena doctrine: how women (and men who think like them) will rule the futureGerzema, John, 1961-

Toxic femininity in the workplaceHogan, Ginny