The flicker of old dreams : a novel / Susan Henderson. 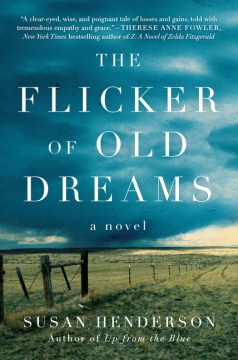 Petroleum, Montana, is a town easily missed, a place without fast-food chains or cell service, where people know the true meaning of hard work. Rocked by tragedy decades earlier, Petroleum never recovered. Neighbors hold tight to resentment, and the population dwindles away. In her second novel, Henderson (Up from the Blue, 2010) brings this dying community to life, detailing the lives of eccentric residents surrounded by a harsh yet beautiful environment. The novel's main character, Mary, is an introvert who works as an embalmer in her father's mortuary. Unable to connect with the living, Mary finds comfort in her unusual career and channels herself into the care of the deceased until a neighbor suddenly returns and changes everything. Mary sees the town in a new light, witnessing the same cruel intolerance she's been trying to escape for years. Henderson's latest tackles the difficult moments of life and death, weighing security against doubt, loyalty versus selfishness, and what it costs to give up everything to find one's true self. Copyright 2018 Booklist Reviews.

Mary Crampton has spent her entire life in Petroleum, a fading heartlands town, but still gets treated gingerly by townsfolk because she works as an embalmer in her father's mortuary. Then she becomes involved with outcast Robert, who's returned to tend to his dying mother, and wonders if maybe there's a life beyond. From a four-time Pushcart Prize nominee; a 30,000-copy first printing.

Henderson's grim and meaty second novel (after ) tackles the subject of death in an all-consuming way. The fictional town in which the story is set, Petroleum, Mont., population 182, has been dying for over two decades, since an accident in a grain elevator took the life of a local high schooler and shut down the town's main source of employment. The protagonist is the mortician's daughter, Mary, who embalms bodies in the basement of her father's house. She is a shy misfit whose dreams of becoming an artist have long since been extinguished, though she remains awed by the majesty of the barren landscape into which she was born. The townspeople resent that their town is dead, and none are content, although Henderson allows readers an occasional glimpse of stolen laughs and stolen love. When the dead teen's brother, Robert, returns to keep his mother company in her dying days, the community's old resentments resurface. Meanwhile, in Robert, Mary finds a soul mate and a fellow oddball who does not conform to the expectations of parents or townspeople. Henderson gives a glimmer of hope for the future at the end of this meditation on death, grief, and emotional freedom, resulting in a contemplative and memorable novel.