Gateway to the moon : a novel / Mary Morris. 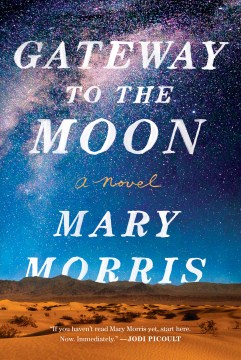 *Starred Review* Focusing on the crypto-Jews of the American Southwest and their European ancestors, Morris' (The Jazz Palace, 2015) enthralling saga ponders the question, Where do we come from? in both a genealogical and astronomical sense. Seeking extra spending money, 14-year-old Miguel Torres, an amateur stargazer from a tiny New Mexican town, takes a job babysitting the two young sons of Rachel Rothstein, a lonely, restless artist and doctor's wife. Full of typical adolescent preoccupations, and curious about his place in the universe, Miguel tries to serve as a positive role model for the boys while noting the odd familiarity of the Rothsteins' Jewish traditions. A parallel plotline follows the story of Luis de Torres, a converso interpreter on Columbus' first voyage forced to conceal his faith. Magnificent characters with complex psychologies, including adventurous entrepreneurs and several courageous women, populate this generational tale of the Sephardic diaspora. Their lives alternate between periods of relative peace and persecution, since the deadly Inquisition is ever vigilant. Over time, memories of their Jewishness vanish, though some traditions endure. The descriptions of culinary specialties are especially divine. The story glides effortlessly between viewpoints and vibrant settings ranging from Lisbon to Tangier, the Caribbean, and Mexico City. With prose as clear as the star-strewn night sky, Morris' novel explores people's hidden connections. Copyright 2018 Booklist Reviews.

Winner of the Rome Prize and, more recently, the Anisfield-Wolf Books Award for , Morris relates an intriguing story of cultural connection. In 1492, even as the Jews and the Moors are being forced from Spain, Spanish Jew Luis de Torres sails with Columbus as his interpreter. De Torres's descendants eventually settle in New Mexico, where, in the present-day town Entrada de la Luna, aspiring young astronomer Miguel Torres can't fathom why the customs observed by the recently arrived Rothsteins echo those of his own family.

Skillfully moving back and forth between New Spain in the 16th century and northern New Mexico in the late 20th century, Morris (;) tells the story of the Crypto-Jews, people who converted to Catholicism in order to escape the Inquisition but secretly maintained many of their Jewish traditions into the present. Morris begins with Luis de Torres, who traveled with Christopher Columbus as a translator to the New World. As the story moves to 1992, we meet the descendants of the Torres family living in a small town in northern New Mexico, still lighting candles on the sabbath, avoiding pork and shellfish, not mixing meat with dairy, and having no idea why they continue these traditions. Among them is teenage Miguel, an amateur astronomer, who takes a babysitting job with a Jewish family and discovers they follow similar customs. The tales of the auto-da-fé and other graphic descriptions of torture from the Inquisition are gut-wrenching. However, it is the story of the Torres family and its successful maintenance of ancient traditions and, most importantly, Miguel's coming of age that will have readers cheering. [See Prepub Alert, 10/22/17.]

Morris () revisits five centuries of history in this spirited story of hidden faith set in 1992 and 1492. Amateur astronomer Miguel Torres has lived in Entrada de la Luna, N. Mex., his entire life, but, with few job prospects, he applies for jobs outside the city. Miguel is hired as a live-in babysitter for a Jewish family in Santa Fe, which will allow him to support and continue to practice his astronomy. While working for the Rothsteins, Miguel is brought face to face with the traditions his Hispanic family has always kept but never questioned. Why are the traditions of this Jewish family, he wonders, so similar to his? Morris intersperses the journey of Miguel's ancestors as they fled the Spanish Inquisition in the 15th century and landed in the New World. Their tale is filled with the horror and betrayal of the Inquisition—including the violence explorers brought to the New World, as told through the journey of Luis de Torres, Miguel's Jewish ancestor. Chapters alternate between the perspective of Miguel, who gradually learns of his Jewish identity, and his ancestors, who slowly make their way across the Atlantic and the Americas before settling in New Mexico. Morris's richly detailed story explores the unlikely ways tradition can live on in the face of attempted annihilation.

The weight of inkKadish, Rachel

We were the lucky onesHunter, Georgia, 1978-

The elixir of immortalityGleichmann, Gabi