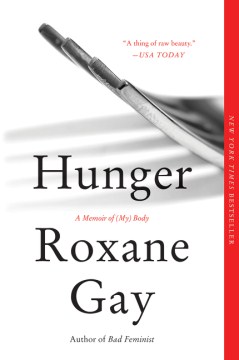 *Starred Review* More than once, Gay, author of essays (Bad Feminist, 2014), short stories (Difficult Women, 2017), and crime fiction (An Untamed State, 2014), refers to writing this memoir as the hardest thing she's ever done. Readers will believe her; it's hard to imagine this electrifying book being more personal, candid, or confessional. At 12, Gay survived a devastating sexual assault, a point on her time line that would forever have a before and an after. She focused the trauma inward, and, as a frequent refrain goes, she doesn't know, or she does, how her body came to be "unruly," "undisciplined," and the kind of body whose story is "ignored or dismissed or derided." The story of her body is, understandably, linked to the story of her life; she tells both, and plumbs discussions about both victims of sexual violence and people whose bodies don't adhere to the ideal of thinness. In 88 short, lucid chapters, Gay powerfully takes readers through realities that pain her, vex her, guide her, and inform her work. The result is a generous and empathic consideration of what it's like to be someone else: in itself something of a miracle.HIGH-DEMAND BACKSTORY: Buzz has long been building for Gay's memoir, with which she'll go on an extensive author tour. Copyright 2017 Booklist Reviews.

Gay, who deals fearlessly with our hardest truths in both essays (the New York Times best-selling Bad Feminist) and fiction (An Untamed State, an LJ Best Book), here addresses issues of eating and self-image, then broadens her meditation on body as she examines violence against women, starting with a terrible incident in her youth. With a 100,000-copy first printing; originally scheduled for May 2016, and the publication month may change.

Gay (Difficult Women; Bad Feminist) states at least twice in this searing book that she's not as brave as people think she is. Yet, this memoir of her body—still reeling and hiding from the sexual abuse she suffered decades earlier as the result of a gang rape at age 12—displays bravery, resilience, and naked honesty from the first to last page. The essays range from describing the events that contributed to her current body weight to the sexual attack and her ensuing secrecy about it to short entries on the various indignities and difficulties involved in being a person of size in the world. We each have a body, she says, and we can all benefit from a close examination of our relationship with it. Buy plenty of copies of this stunning work because it will be on every end-of-year best list; essential reading after Gay's debut novel, An Untamed State, as it explains the emotions behind that brutal story. [See Prepub Alert, 1/4/17.]—Henrietta Verma, National Information Standards Organization, Baltimore

"I ate and ate and ate in the hopes that if I made myself big, my body would be safe. I buried the girl I was because she ran into all kinds of trouble. I tried to erase every memory of her, but she is still there, somewhere." So Gay, who deals with our hardest truths in both nonfiction (Bad Feminist) and fiction (An Untamed State), addresses issues such as eating and self-image, then broadens her meditation on body as she examines violence against women. With a 100,000-copy first printing.