If you leave me : a novel / Crystal Hana Kim. 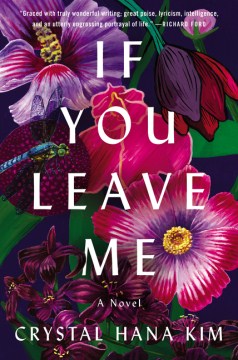 *Starred Review* Hunger, both physical and emotional, haunts the lives of the extended Lee-Yun family during the tumultuous, violent decades that define modern South Korea in the latter twentieth century. Haemi and Kyunghwan are childhood playmates in the final years of Japan's brutal colonization, then become desperate, hard-drinking refugee teens in the midst of falling in love when the country is cleaved in two, only to regretfully separate in the final years of the Korean War. To satisfy her family's needs for food, respect, and status, Haemi marries Kyunghwan's second cousin, Jisoo, and seems to lose them both to the conflagration. Jisoo, damaged but alive, returns to Haemi to join her survivalist mother and her sickly younger brother. Through postwar industrialization, political upheaval, and civilian protests, Haemi struggles with loss after loss, giving birth to four daughters, falling more and more into despair with each. Her inevitable reunion with Kyunghwan sets in motion unavoidable devastation. New York born, Columbia MFA-holding Kim won a PEN/Robert J. Dau Short Story Prize for Emerging Writers in 2017 for "Solee," part of an interconnected story collection that became this, her debut novel. Kim renders her multivoiced, multilayered ancestral and cultural history into stupendous testimony and indelible storytelling. Copyright 2018 Booklist Reviews.

Fleeing to a refugee camp when Communist-backed troops from the North invade her hometown in 1950s Korea, Haemi Lee clings to a beloved friend but is drawn to the security offered by his wealthy cousin. With a 75,000-copy first printing; Kim won PEN America's Story Prize for Emerging Writers.

This first novel opens in 1951 Korea, where readers first encounter 16-year-old Haemi in a refugee camp with her widowed mother and brother after Communist-backed troops from the north invade her hometown. Initially depicted as a strong-willed young woman, Haemi dresses as a boy to traipse off during late-night hours with childhood friend Kyunghwan, with whom she's in a budding romance. When Haemi consents to helping her family by marrying Kyunghwan's wealthier cousin Jisoo, Kyunghwan learns to suppress his feelings and come to terms with the loss of his first love. Up to the year 1967, the narrative follows these three in alternating chapters as they deal with the trauma of war and mature through life. Things take a turn halfway through when Haemi and Kyunghwan reunite in Jisoo's home, with Haemi now the mother of three daughters and the wife of an unfaithful husband. Readers who enjoy novels by Jamie Ford and Lisa See will surely appreciate Kim's first work. Filled with brave personalities of all ages and character-driven story lines that are emotionally gripping, this sensitive and hauntingly written novel will easily leave readers wanting more. [See Prepub Alert, 2/11/18.]

A family struggles to balance tradition and change in Kim's marvelous debut. Sixteen years old and living in a refugee camp in 1951 Busan, South Korea, Lee Haemi is not interested in marrying but knows the plight of her situation might necessitate it. War has put everything on hold except starving, dying, and desperation. Her decision to find a husband—borne partially out of hope for finding help for her ailing little brother, Hyunki—ripples through the lives of those around her, especially the cousins who compete for her affections: quiet, studious Yun Kyunghwan and loyal, clever Yun Jisoo. Kyunghwan and Jisoo are both conscripted and go off to war, where the former is injured and the latter becomes inured to the staggering violence and cruelty he witnesses. After the fighting, Jisoo asks Haemi to marry him, and she agrees, feeling he is the best option to guarantee the safety of her family. After they move to a small town and start a family of their own, Kyunghwan tries to get into college and fails; instead, he lands several demeaning jobs before eventually working his way up the ladder through a series of factory jobs. In a crucible of political upheaval, modernization, and tumultuous love, Haemi is faced with choosing between safety and her own passions when Kyunghwan reenters her life. Kim's lyrical intergenerational saga resonates deeply and will appeal to readers who enjoyed .

The marriage of opposites: a novel based on the life of Rachel PizzarroHoffman, Alice

And the mountains echoedHosseini, Khaled