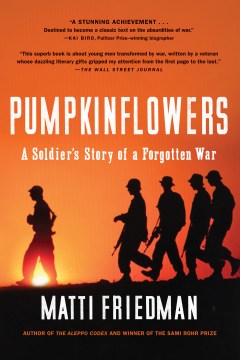 *Starred Review* Writing out of a surprising sense of gratitude, Friedman gives thanks for what he learned by serving in the late 1990s as an Israeli soldier assigned to a vulnerable hilltop fortress in Lebanon called the Pumpkin. Above all, the Pumpkin taught Friedman that a frighteningly thin line separates him from soldiers who perished during the Lebanon conflict, soldiers like the free-spirited writer Avi, whose life ended in a tragic helicopter crash. But then the Pumpkin repeatedly exposed realities hidden behind conventional boundaries. Readers marvel, for instance, at how battlefield events dissolve beneath the illusion of media images captured by a Hezbollah cameraman. The definitions separating soldier from civilian also repeatedly fade as the guerrillas threatening the Pumpkin vanish into village populations and as Israeli mothers spearhead a pacifist movement forcing military planners to abandon their strategies. Even the hard division pitting Israeli against Arab softens when Friedman recognizes a genial countenance in the photograph of a dead Hezbollah fighter. Disturbingly, however, readers finally contemplate the way Israel's failed incursion into Lebanon has catalyzed a new regional turbulence, vaporizing hopes for peace between Israelis and Arabs and plunging Syria, Iraq, and their neighbors into a cauldron of chaos. A compelling narrative, freighted with explosive geopolitical implications. Copyright 2014 Booklist Reviews.

Recipient of the American Library Association's Sophie Brody Award for The Aleppo Codex, Jerusalem-based reporter Friedman here turns his attention to war in this memoir documenting his time with an Israeli platoon in Lebanon in the 1990s. Most of the action takes place in battles atop a highly contested hill nicknamed Pumpkin, with flowers referring to a military term for casualties. Friedman's history of the conflict provides insight into a soldier's life in that region, the cultures of the area, and the politics and repercussions of war. The constant threat of roadside bombs adds a sense that death hovers over the fighters, all amid a political climate that makes it difficult to determine heroes from villains, or if there are such things at all. Short chapters make this account fast and engaging, as if Friedman were clicking through a slideshow, describing each scene with great heart and detail. VERDICT A compelling war memoir containing elements of terror, observation, boredom, and grim (at times absurd) humor. This is an excellent read for anyone interested in military memoirs or biographies, war reporting, and the modern Middle East.—Benjamin Brudner, Curry Coll. Lib., Milton, MA

Friedman, an Israeli journalist and writer, recounts the history of a hilltop bunker in southern Lebanon that was held by the Israeli army during the 1990s, beginning with the biography of a young soldier stationed there and transitioning into a memoir of his own time on the hill and his post-war visit as a tourist. Friedman's personal reflections alternate with a history of Israel's conflict in Lebanon, which he refers to as an unnamed and forgotten war, as he covers civilian sentiment, political responses to war and protest, and military strategy through the period. Though short, the book is remarkably educational and heartfelt: Friedman's experiences provide a critical historical perspective on the changing climate of war in the Middle East, shifting from short official conflicts into longer unwinnable wars full of guerilla tactics and the deliberate creation of media narratives and images. His lyrical writing, attention to detail, and personal honesty draw the reader into empathy along with understanding. Friedman's memoir deserves wide readership. (May)

Places and names: on war, revolution, and returningAckerman, Elliot

A long way gone: memoirs of a boy soldierBeah, Ishmael, 1980-

Jarhead: a Marine's chronicle of the Gulf War and other battlesSwofford, Anthony

The drone eats with me: a Gaza diaryAbu Sayf, Atif

Long shot: the inside story of the snipers who broke ISISAzad, 1983-

First they killed my father: a daughter of Cambodia remembersUng, Loung

The girl who stole my holocaustChayut, Noam, 1979-