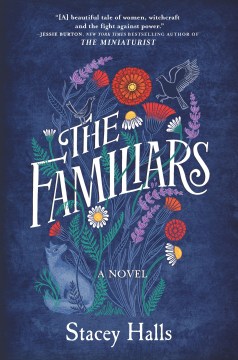 The mistress of an English country estate in the early seventeenth century, Fleetwood Shuttleworth is desperate. So far she has failed to produce an heir, suffering several pregnancies that all ended in miscarriages. Now, pregnant for the fourth time, she finds a letter from her husband that indicates she may not survive another attempt. It is under these circumstances that she meets Alice Gray, whose midwifing skills quickly prove indispensable to Fleetwood. But as an ambitious magistrate sees his opportunity to advance his career by pursuing witches in nearby Pendle, Alice's skills with herbs and healing take on a darker appearance, which may put her life and those of Fleetwood and her unborn child at risk. Rich with intrigue and filled with details of the constraints faced by seventeenth-century women, both well born and common, The Familiars offers a look into the real-life world of the notorious Pendle witch trials that ended with 11 executions. Amid suspicion and rumor, the bond born out of need between Fleetwood and Alice must survive the unforgiving obstacles they both face. Copyright 2019 Booklist Reviews.

With child again after three failed pregnancies, noblewoman Fleetwood Shuttleworth finds a letter from her doctor claiming that she will not survive another pregnancy. She and midwife Alice Grey intend to prove him wrong, but then Alice is accused of witchcraft, and England's notorious 1612 Witch Trials of Pendle Hill fast approach. Acquired in a two-book, six-figure deal in a blast-furnace auction and MIRA's biggest debut of winter 2019.

DEBUT Halls's first novel is set against the backdrop of the 1612 Pendle Witch Trials and features 17-year-old noblewoman Fleetwood Shuttleworth, who is happily married and mistress of one of the greatest mansions in Lancashire. The only thing she lacks is an heir. After three miscarriages, Fleetwood is pregnant for the fourth time when she discovers a letter from a doctor to her husband, warning that she will not survive another pregnancy. Taking her health into her own hands, Fleetwood engages local midwife Alice Gray to help her deliver a healthy baby. But when Alice is implicated in the witch hunt sweeping the county and arrested, Fleetwood must find a way to save her friend, and by extension her own life, even if it means going against her husband and the town magistrates. A relatable first-person narrator helps make the history of this thoroughly researched novel feel more approachable. A solid addition to all fiction collections, with teen appeal. [See Prepub Alert, 8/20/18.]

Halls's enthralling debut opens in 1612, when lonely Fleetwood Shuttleworth, mistress of Gawthorpe Hall in England, is only 17 and pregnant for the fourth time, and, because of a letter her husband received from a physician, she has good reason to believe that she and her baby will not survive. Her failure to give her husband Richard an heir weighs on her, and with him frequently away, she relies on her loyal French mastiff Puck for companionship. Then she meets quiet, strange midwife Alice Gray, who ensures Fleetwood she can help her deliver a healthy, living child. Soon, Alice is arrested for murder and swept up in a vicious witch hunt. Devastated by Alice's imprisonment and reeling from the discovery that Richard is keeping a pregnant mistress in her supposedly abandoned childhood home, Fleetwood sets out to save the life of the only woman who can save hers—and the only true friend she's ever had. Fleetwood, who narrates, paints a portrait of her life and friendship with Alice that is often imbued with a sense of the otherworldly, depicting a pivotal bond they forged in a time when women had little agency over their lives, their bodies, or their fates. Set against the furor leading up to the Pendle witch trials, Halls's winning novel is a quietly powerful and richly evocative tale.

Daughters of the Witching HillSharratt, Mary, 1964-

A murder at Rosamund's GateCalkins, Susanna