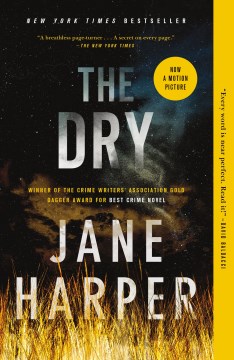 *Starred Review* Australian author Harper's debut is a stunner. Sold in a bidding war (the film rights were bought soon thereafter), it's a small-town, big-secrets page-turner with a shocker of an ending evocative of Nancy Pickard's The Virgin of Small Plains (2006). Harper tells the heart-wrenching tale of a man named Aaron Falk, who returns to his hometown to attend the funeral of a friend who is believed to have shot his wife and son and then killed himself. The town is in perilous decline, undergoing the worst drought in a century. The idyllic river of Falk's youth has dried up, and all that remains is a "monstrous wound." Now a federal agent, Falk begins to question the details of the crime and, together with the town's police sergeant, Raco, undertakes a painful investigation. Twenty years earlier, Falk and his father fled under a cloud of suspicion surrounding a young woman's death. This still-unsolved case simmers in the "boiling air," and the townsfolk are resentful of Falk's presence. Falk and Raco manage to unravel secrets new and old in the course of uncovering the sad truths behind both crimes. Recommend this one to fans of James Lee Burke and Robert Crais, who mix elements of "bromance" into their hard-boiled tales. But the book's appeal extends further: the Australian setting will attract both followers of Peter Corris' long-running Cliff Hardy series, as well as Golden Age fans who remember Arthur Upfield's novels, especially Gripped by Drought, published in 1932. Copyright 2016 Booklist Reviews.

When Luke Hader and his family are found shot to death at their farm near the small town of Kiewarra, the locals presume it to be a murder-suicide, the desperate act of a man pushed to the brink by financial woes caused by the area's two-year drought. Luke's father is not convinced, though, and asks Aaron Falk, once Luke's best friend and now a police officer in Melbourne, to investigate. But as Aaron probes the case, he faces hostility from the townspeople who remember that 20 years ago he had been a teenage suspect in the drowning death of a young girl; what saved him from being charged were the alibis Luke and Aaron had given each other—alibis that some residents know were lies. Winner of the 2015 Victorian Premier Literary Award for an unpublished manuscript, this first novel by a former journalist was an Australian best seller, but despite the critical acclaim it has received, this work fails on many fronts as a mystery: slow, tedious pacing; poor character development; lack of suspense or surprise (readers can spot the culprit and plot twist a mile away). Because of the advance hype, crime fiction fans will want this, but steer disappointed readers to Peter Temple's superior , which offers a more authentic portrait of small-town Australia. [See Prepub Alert, 7/25/16; library marketing.]

Featuring a federal investigator from Melbourne facing his past, this book was scheduled for September but was pushed back to take advantage of strong advance notice. Sold to 19 countries and to Reese Witherspoon's production company.. Copyright 2016 Library Journal.

In his youth, Aaron Falk was accused of murder and with his father forced from their hometown; he was saved from prosecution only by the testimony of best friend Luke that they were together at the time of the murder. Now, Aaron, a federal investigator in Melbourne, learns that Luke has been found dead after committing a heinous crime, and a note in the mail further informs him, "Luke lied. You lied. Be at the funeral." This work has strong credentials, having won the 2015 Victorian Premier Literary Award for an unpublished manuscript and been sold to 19 countries; Reese Witherspoon's production company grabbed the film rights.

At the start of Australian author Harper's devastating debut, Melbourne-based federal agent Aaron Falk returns to his drought-stricken hometown, Kiewarra, for three funerals—those of popular school aid Karen Hadler; her six-year-old son, Billy; and her husband, Luke, Aaron's childhood best friend. Luke apparently murdered Karen and Billy before turning the shotgun on himself. Falk knows better than anyone that his charismatic mate may have had a darker side—two decades earlier as teens they gave each other bogus alibis for the afternoon of high school crush Ellie Deacon's suspicious death by drowning. When Luke's brokenhearted parents beg Falk to investigate, he can't refuse. But as Falk begins digging with the help of recently arrived Sgt. Greg Raco, including looking into a possible connection to the earlier tragedy, he swiftly discovers that a badge may not protect him from a town driven to the brink. From the ominous opening paragraphs, all the more chilling for their matter-of-factness, Harper, a journalist who writes for Melbourne's Herald Sun, spins a suspenseful tale of sound and fury as riveting as it is horrific. Agent: Daniel Lazar, Writers House. (Jan.)

A madness of sunshineSingh, Nalini, 1977-

Death of a rainmaker: a Dust Bowl mysteryLoewenstein, Laurie

The virgin of Small PlainsPickard, Nancy