Over the top : a raw journey to self-love / Jonathan Van Ness. 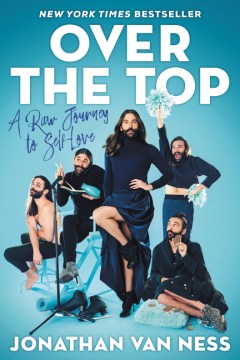 This memoir from Queer Eye's grooming expert Van Ness begins with two notes: a disclaimer that some names have been replaced with Russian aliases, because I'm obsessed with the Romanovs, thanks to the animated classic Anastasia; and a sensitivity warning that the book contains matters of sexual abuse and addiction, along with a list of resources for fellow sufferers. These are important notes. Van Ness dubs almost every family member, friend, lover, passing acquaintance, and former workplace a Fyodor, Hethersova, or Tonia Skoekenkaya Tutberidze, an approach that takes a second to get used to but which, happily, does not get old. And there are some difficult things here that the ebullient, hilarious-catchphrase-machine of a star discusses publicly for the first time.His super-supportive mom, imagination, and love for Olympic sports, especially gymnastics and figure skating, helped him through the everyday challenges of being young Jack in Quincy, Illinois. If my passion for life was a flame, so many people were trying to figure out how to douse water on it—but I kept it burning within myself. No amount of homophobic, misogynistic fuckery was going to pull me out of that. Teenage determination to succeed in swimming and cheerleading despite obstacles (including frequent bullying) set him up to make it first as a hairstylist and eventually as an entertainer when his Gay of Thrones parody series and Getting Curious podcast took off, and now as one of the Fab Five.After a lot of turmoil in his twenties, he was able to connect the trauma of childhood sexual abuse to the compulsive behaviors that led him to rehab. He also shares his HIV-positive status, currently undetectable thanks to testing and medication, and provides readers with a lot of information. Heaviness is both delivered seriously and balanced with humor, as when he shares, gloriously in full, his sixth-grade report, The Bill Clinton Sex Scandal: According to Me, just to lighten the mood. On every page, Van Ness comes across as genuine, and genuinely trying to help others, especially young LGBTQ+ people, by sharing his story. Fans will and should flock to Van Ness' celebration of hard work and hard-earned self-love, and they'll only love him more after reading it. Copyright 2019 Booklist Reviews.

Beautiful on the outsideRippon, Adam, 1989-

Karamo: my story of embracing purpose, healing, and hopeBrown, Karamo

How I got this wayPhilbin, Regis